Halloween in Oliver: Building Community One Candy at a Time

Halloween in Oliver: Building Community One Candy at a Time 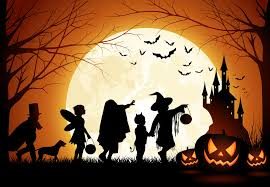 Trick-or-Treating has long been a Canadian tradition: stuffing your snowsuit under your costume, grabbing a pillowcase, walking down the street among your costumed friends from house to house, and collecting candy from neighbours is a fond childhood memory for many of us. However, living in a high-density neighbourhood can make traditional trick-or-treating a challenge: kids and families often don’t know which buildings and suites are handing out candy and neighbours eager to give candy don’t necessarily have a way to let families know that they’ll be handing it out. Thus, many Oliver families end up going to malls or suburban neighbourhoods to go Trick-or-Treating and many residents don’t hand out candy at all.

A few years ago, Oliver resident Carolee Morais partnered with Oliver Community League board member Angelika Matson to try and solve some of the challenges posed by urban trick-or-treating and keep kids in the neighbourhood for Halloween. Over the years the event has evolved and now comes in two parts: buildings handing out candy contact the Oliver Community League via email or Facebook and let them know that their building will be handing out candy from the front doors. The participating buildings are then put on a Google map, or Candy Map, if you will,  so families know exactly which houses and buildings to hit up in Oliver, and the map is advertised via social media and posters around the neighbourhood.

The event is wildly popular, attracting people of all ages and backgrounds. “Last year we had kids and families that had recently moved to Canada and had never gone trick-or-treating before; once we explained the tradition, they were thrilled to be able to participate. One condo of primarily seniors had an enormous table full of baked treats, candy, and juice boxes and their faces lit up every time a costumed child would walk through the door,” Angelika recounted. “There’s a couple by Kitchener Park who always hang up tons of Halloween decorations, and this year they’re going to have a hot chocolate station. The Oliver Community League is going to have a fire-pit set up in Kitchener Park as a warm-up station because last year kids got cold walking between buildings. Every year we learn what works and what doesn’t and this event just gets better and better.”

While Trick-Or-Treating in urban neighbourhoods might take more effort than in the suburbs, Angelika says the work is worth it. “Last year I had a low-income family come up to me and explain that they can’t always afford to take the bus or drive out to other neighbourhoods so they were so grateful they could take their son Trick-Or-Treating here in Oliver. They said he wanted it to be Halloween all year round. Little moments like that are what builds community and strengthens Oliver for everyone.”